Today is the Everett half marathon which means my normal Sunday spot would not be easy to get to. Not impossible, but one would have to go pretty far past it via the interstate and then double back. I was there yesterday for a bit anyway. We finally had some dry weather so I finally went over to try skating again for the first time in 20 years. That wasn't my best idea, I was awkward from the get-go and fell pretty quickly.

I'm older, bigger, and stiffer than I was last time, so even though I was practically born on skates and always found it easy, I don't now. I need some kind of practice. Maybe after my second dose I'll hit the skating rink sometime so there's at least a wall to hang on to. I also thought it might be smart to bring trekking poles along for something to hang onto. After all, that's my favorite use for them in actual hiking: something to hang onto when there's nothing, such as when crossing a stream by stepping from rock to rock.

Rain is one of two reasons I'd been avoiding Japanese Gulch since the fall. Normally rain's not a dealbreaker there because I can go up via the railroad tracks and the gravel part next to them, but a while back they started tearing that up and piles of railroad ties made me wonder if they were rebuilding the tracks. Since I wasn't heading to Langus today, I figured I may as well go see.

Strangely, when I got there, the tracks looked pretty much like they did before. The gravel next to them was put back in place, but the ties were nowhere in sight and not installed below any tracks. Did they bury them to reinforce the gravel hill? No clue. But the cool thing is that they put gravel down on the lowest trail up the center, which would always get very muddy in wet weather. It was really cool to be able to walk down that without worrying about possibly having to turn back because of ankle-deep mud and running water.

I also saw a spot where someone's building a new bridge from the center to one of the side trails over a perpetually-muddy spot. And then I got pretty confused after spotting a bridge that's always been there on what I always figured was a mostly-abandoned trail. The time I crossed it, a board cracked and I fell through, but I didn't see any broken boards. Did someone fix it? Why would they? Maybe it's not as abandoned as I thought.

The center having new gravel is also a little confusing, because it's not officially part of the park. Maybe it's getting bigger? I can't find any info suggesting that.

It's been a very busy month and I'm now two weeks late with my zine. So maybe in two weeks I'll have it ready and just skip a month. Thankfully I never said it was monthly and there are just issue numbers anyway. It's got a pretty small readership so no need to panic.

Yaphet Kotto has died so I will share a story. Garrett and I were at a bar at Sea-Tac before a flight and a woman who we chatted with revealed she was once a celebrity personal assistant. I said that was neat and that I worked with a former celebrity personal assistant and asked who she worked for. She didn't want to say because I probably wouldn't know who they were. I bet her that I probably would, and was correct. It was Yaphet Kotto. I was a little offended by the implication that I hadn't seen classics like Alien or The Running Man, and I'll wonder forever if she ever even saw Freddy's Dead: The Final Nightmare.

I wasn't going to take any photos or post about this year's snow, mainly because I'm sick of it. When all you can really do is go out for a walk and then can't even do that? It blows. But it's the first snow since our fence went up and I figured that was worth getting a picture of. 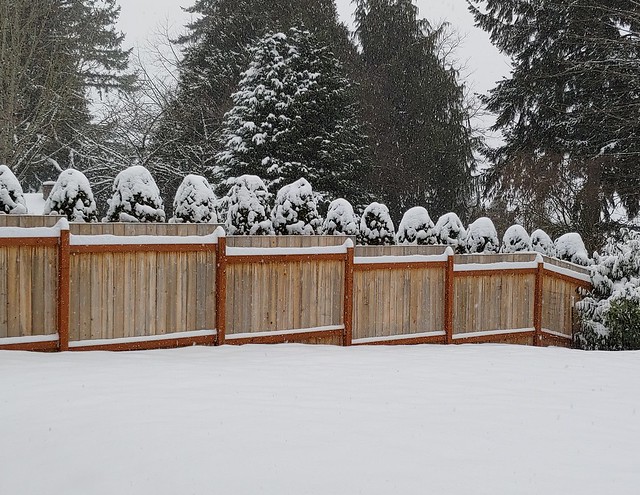 I got a text from my pharmacy today saying they were partnering with whichever delivery service. We're not far from the pharmacy and they have a drive-thru, so it's never been a big deal to go over there, though I didn't have to in 2020 because my insurance used a mail-order one.

If I'd gotten that text while not in a pandemic, I would have though nah, I'll just pick it up on my way to or from something else. But for the last few weeks the only time I go anywhere it's for an early morning walk, hours before the pharmacy is even open. And it just felt stupid to leave the house just for that. If I were making a shopping trip or heading to or from the Korean spa, of course I'd just swing by. But today I just didn't feel like leaving for just that.

This isn't something I see myself doing every time, but they definitely caught me on the right day to try it out.

I don't even wear a watch any more, and this doesn't work anyway, but I had to have it. And I have another so I can experiment with band options. 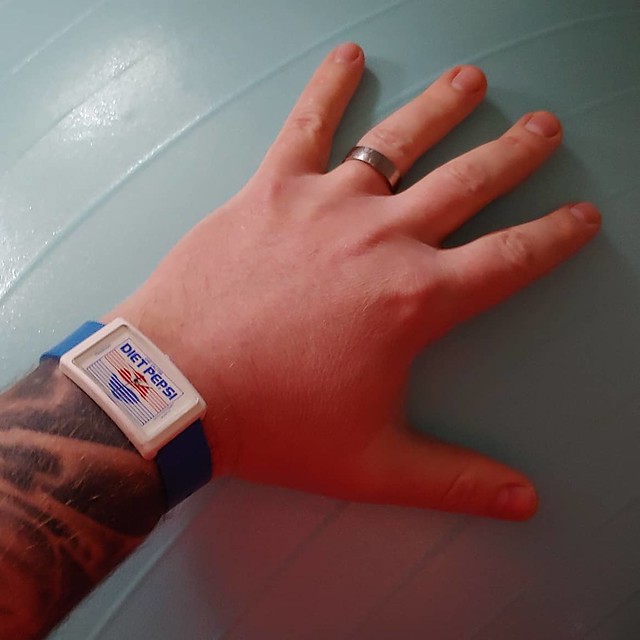 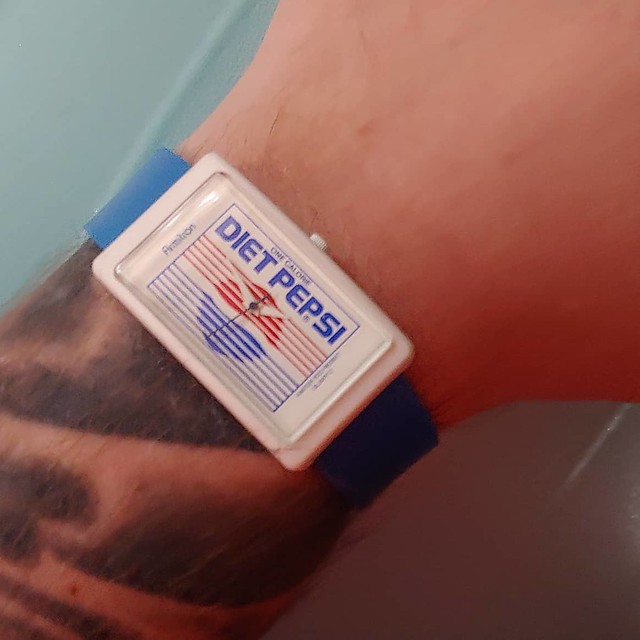 This passport photo came up in memories today so I put it together with my recent driver license photo. It took me a couple of minutes to realize my hair is about the same length in both! Only now it's just the top and it's tied back. 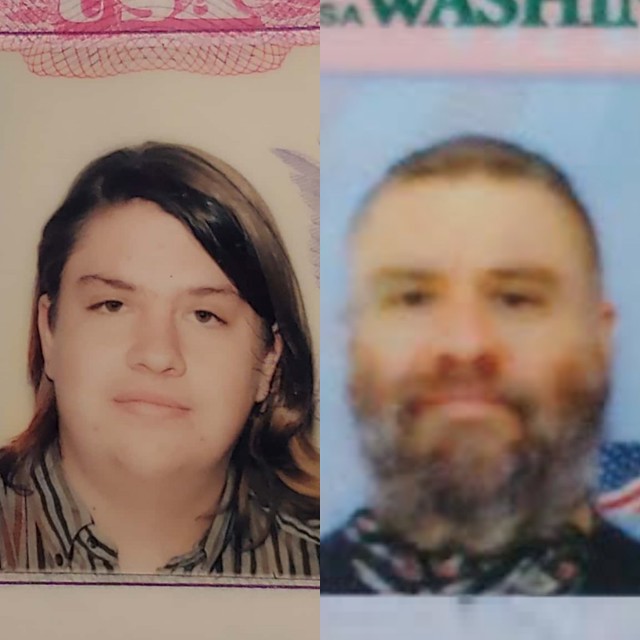 Anyone else have a driver license photo with a mask around your neck now? Mine came up for renewal back in July but the DOL offices were closed then. I could have renewed online but wanted to get the corrective lenses restriction removed since I've worried ever since I got LASIK that I'd get pulled over and in trouble for not wearing glasses. Since I was going in anyway, I applied for the enhanced driver license, too. They weren't doing vision tests because they don't want multiple people shoving their face into the thing daily, so now I have the EDL, but also still have the corrective lenses restriction. That'll remain until they resume testing or until I care enough to make an appointment at the eye clinic for a test with them. 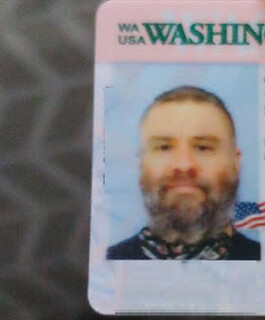 I decided a while back that I'd try inline skating again this spring, and once Christmas was over, I ordered all new gear for it. It was a little surprising to learn there are only a couple of choices if you want skates that go over your shoes, and only one brand that gets even remotely decent reviews, the Doop by Powerslide. And I'm not even sure they're going to keep making them as the stock everywhere seems to be disappearing. But I got my pair, along with my first helmet ever and a full set of pads. I grew up on rollerskates and wasn't afraid of inline ones at all in my 20s, and only wore knee pads and wrist pads. Now that I'm older? I want it all.

The reason I wanted skates that go over shoes is that I'm always thinking about what might happen. If I need to walk back to the car, for example. I'd rather just step out when the need arises than always have to carry shoes.

Trying the skates on the first time I found that I couldn't close them with the giant tongue, and my whole foot came out of the shoe rather than my foot and shoe coming out of the skate. So I wanted a thinner shoe that stays on tight, and the Converse All-Star is an obvious choice. I had a ton of pairs over the years and was surprised I couldn't find any laying around. I thought for sure the pair I bought when we went to Portland and I realized halfway there that all I had was sandals and I needed something more would still be around, but it wasn't where I keep my shoes. Maybe they're around somewhere but a new pair's on the way.

It'll be a while before I try them because I won't let them get wet and it's been raining a lot lately. Monday was a heavy pour day and I didn't feel like walking in it, and I consistently do PT Tuesday/Thursday/Saturday, so I didn't want to do that either. My wild idea? Find some of the '90s Susan Powter aerobics videos I did back in the '90s. But they're all around 50 minutes each and without having done them in ages, that seemed like a terrible idea. I settled on a 12-minute Sweatin' to the Oldies video from Richard Simmons, and I was glad it was a video. Remember how awful it was back in the day to get a move wrong and go the opposite direction of the rest of the class? By yourself at home there is no rest of the class.

It was quite a workout even in that short of a time, and I've been surprised the rest of the week to find my right knee was not happy about it. Obviously that makes me worry about my skating future, too. My walk yesterday was lovely, though.

Lately every time I get up Steve takes my spot and that's fine! Completely understandable behavior for a cat, the spot's warm, I totally get it. But for the past week or so he won't move when I get back and whines so much when I pick him up. A while ago he didn't take my spot and I thanked him for not taking it and then felt dumb for expressing gratitude to a cat, but then he didn't take my spot the next time I got up. So maybe it worked? Crap, I should have thanked him again.

We don't send out cards but I'm glad we came up with a good alternative, taking a photo late on Christmas day to post everywhere. It's a long day with usually very little going on, so why not? 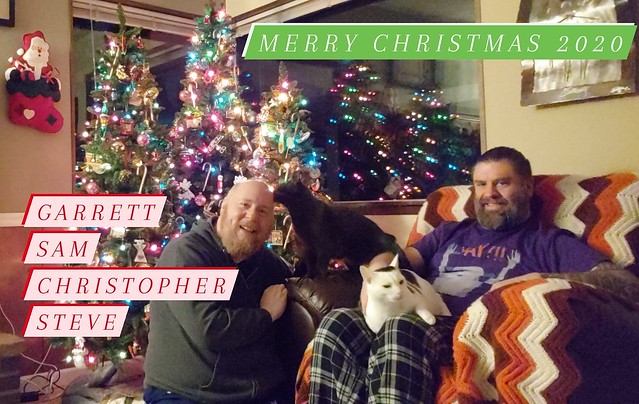