Today's my first day back at the office since I hurt my ankle. I had to make a lot of changes to my morning routine because of it. Normally I take a bus down the back of the hill down into Montlake and transfer to the commuter at the 520 freeway station. That was out of the question because you have to go down a ton of stairs to get there, so I went the other way and caught the bus at the base of the hill, before it gets on the freeway.

Normally once the bus gets to campus, I don't get off with everyone else and get a shuttle, because I'm further out and get dropped off last, plus sometimes there's this woman who just can't go ten minutes without hearing herself talk. So, instead, I like to go one more stop and walk about half a mile to the office. It's nice, I like walking. But now I get off with everyone else and grab the shuttle. Miss Mouth wasn't on it today, thank goodness.

Getting around with the cane and the boot is very awkward. Especially on the bus steps.

Lots of good suggestions on the Food Network Star looky-likey post, but I still think there's someone else out there. I'll probably figure it out in ten years. Speaking of Food Network Star, last two seasons, there was someone I wanted to win each time from the very beginning, and they both ended up winning. This season, I don't really like anyone that much so far, so that's different.

-----
Ongina from RuPaul's Drag Race/Drag U will be appearing at The Eagle soon. That's odd. I picture them making a little stage out of cases of beer over by the window. Hopefully she gets to stay at Homewood Suites since it's, like, a block away.

I'd be more excited about Google+ if I hadn't just joined Facebook. And speaking of Facebook, I don't hate it. I'm guessing that a lot of people who hate it didn't think to turn off most email notifications. What I like about it is that there are a lot of people out there I'm more in touch with now, and I've decided that to keep things the way I like them, christopher575 (lj, twitter, flickr) and Christopher [redacted] (Facebook, LinkedIn) are separate. It's a bit of a pain because I can't link certain accounts certain ways, but that's a first-world problem that's easily taken care of with some forwarding and some saving here and there.

I do find it disappointing when I can't find certain people, even on there. I figured I was one of very few holdouts among the people I've known, but it turns out it's not uncommon.

I'm also amused to have heard from certain people who treated me like complete shit in the past. I added them anyway. They say living well is the best revenge, and part of how you know you're living well is comparing your awesome life to the lives of people you dislike.

I really, really love the new lava lamp. I wish I had a whole row of them in different colors. That's probably not going to happen any time soon, but in my fantasy rec room/bar I'm already planning where to put them.

I spent over $300 on house stuff over the weekend. It was money well-spent. I love Garrett and having a home together with him. 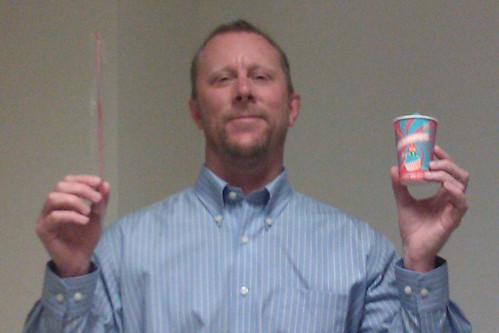 My officemate and his free Slurpee, originally uploaded by christopher575. 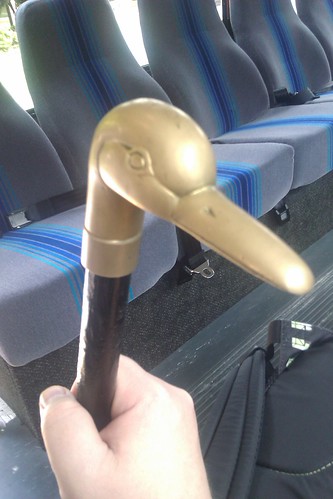 Due to intense peer pressure, he is changing his name to the French spelling, originally uploaded by christopher575.

Please give a warm re-welcome to Henri!