I left Henri home today. I felt like the benefit of the extra stability wasn't worth the awkwardness of having to hold him on the bus or the pain in my left hand when I zoned out and put too much weight on that side. I think I'll be fine with just the boot. But we'll see.

After ten days of relaxing on the couch with my foot up, returning to the office is a painful and ugly ordeal. When I took the boot off yesterday, my whole lower leg was swollen. Not just the ankle, but all the way up to the knee. What made it even ickier was that the parts where the straps are on the boot were all dug in, so my leg was all bumpy and gross. I'm going to the urgent care place for a follow-up today, and am not looking forward to taking off the boot to reveal my Frakenstein-looking leg when I get there.

Got stuck with Miss Mouth today. She got into a shuttle and I asked if it was going where I needed to go. He said no, and to go to the one behind him, but the one behind him sent me back to him. I guess what I had heard was him yelling for me just as I'd walked away. Thanks for all the extra walking! And of course, it was just me, the driver, and Miss Mouth in the shuttle, and of course, she had to ask what was up with my leg. But that's just her in. I'm sure you know the type, they ask a question just to be able to answer with their life story, so I got to hear all about the time that she hurt her Achilles tendon and ignored the doctor's advice to stay off it for three months, so she ended up in a cast for another three months, which was torture, because she loves sports, especially swordfighting, and since she's into swordfighting you know something like a soccer ball flying toward her face isn't going to scare her, but something as mundane as being stuck at home with her foot up is the worst, especially because her roommate was going to be in Israel for the first two weeks, but at least she had time before the cast went on to set herself up in the downstairs bedroom so she wouldn't have to go up and down the stairs in the cast and blah blay yak yak ... . .. OH what sweet relief when we pulled up to her office.

And it's probably going to be like that every day.

Actually if I'm as sore when I leave today as I was yesterday, I might go back to working from home. This office chair is terrible, but I've always managed to get through the day by shifting around a lot and getting up often.

I haven't had the work salad bar in a long time. Depending on what else is available, I'll probably have it today. It's sad how often I think about that wonderful, wonderful salad bar. 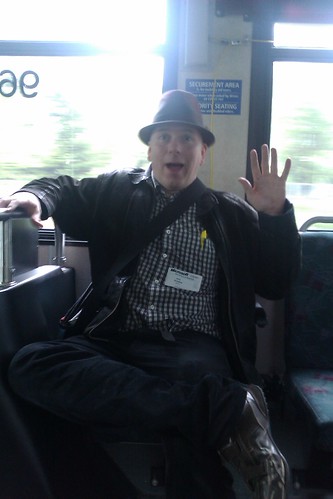 On a bus with mcfnord, originally uploaded by christopher575. 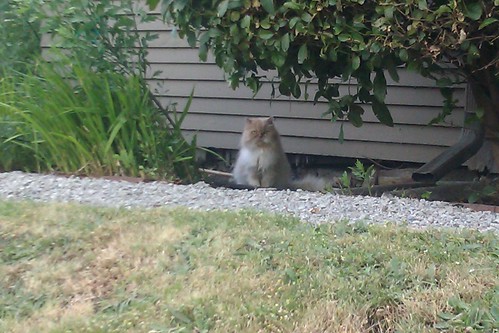