This last weekend was a blast. Garrett spent a couple of days up in Canada at an air show, and since I knew I wouldn't want to go to that, I asked Brad (

muriel_puce) if he was available to do something. Unfortunately, even a month or so out, there were no easy reservations to be had anywhere like Port Townsend or Leavenworth, two places I've wanted to see for a while. If you can't go somewhere new, the next best thing is to go somewhere cheap, and Brad came through with an invitation to stay the night at his friend Kendall's house, and Kendall even threw a cocktail party for us, making our stay there that much cheaper.

Portland's vintage shops are amazing. If I were rich and had tons of space, I could have spent a lot. Hopefully Brad will post the amazing salad spoons I made him buy.

I had a really great time hanging out with Brad and would definitely enjoy more little trips like that in the future.

Someone posted some of the SeaWC pages on Reddit and suddenly it's getting lots of traffic. Makes me sad that there was what I've heard is a cool bathroom before that I was going to get on Friday, but they were out of what I wanted and I felt weird about using their bathroom anyway, so I left.

People keep complaining that they don't want their parents to be their Facebook friends. I kinda want to tell them that they're being assholes and that I'd kill to have my mom still alive and on there. And she totally would be, too. She actually had an AOL problem back in the day. It used to be, every single time I came home, the first sound I'd hear was the AOL instant message chime. I started imitating it when I walked in as a greeting, and eventually replaced the file on her computer with a clip of me imitating it. Of course it scared the living hell out of her the first time it happened. But after that she liked it.

I'm not kidding when I say she had a problem. I asked someone who worked there to look for me and see how many hours she was on, and it was something like 50 hours a week, even though she had no computer at work.

I was smart yesterday and worked on today's dinner. When I got home, I cooked up a batch of red quinoa and washed a bunch of produce, and before bed I used it to made a big batch of tabbouleh. Stuff like that is so much better after the flavors combine and the whole thing's had a chance to chill. I'm serving it tonight with my famous chicken and some hummus and toasted pita.

Today for lunch, I had one of those noodle trays that I ate every day for lunch a few years ago, but orange chicken flavor instead of beef. It was terrible and kind of small and I think I'll go get some vegetables or something from the cafeteria. 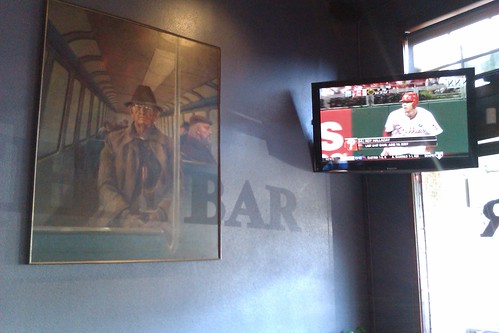 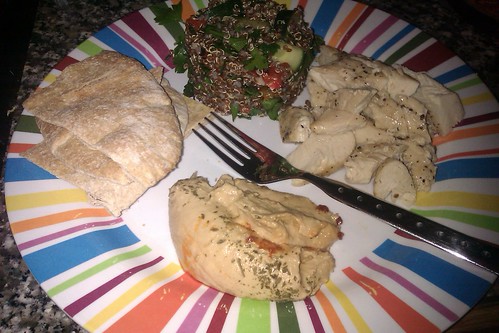 I made dinner, originally uploaded by christopher575.