Hand me a tissue, please.
When was the last time you cried?
Reply 418

It's really weird. This one came up on Facebook with the icon of one of the users who answered it, which happened to be of John Lithgow of all things. We just finished his season of Dexter, so I've been seeing a lot of him. This has been weird for me, because he looks a lot like Jackson. For those who don't know, I was with him for over ten years, and over eight of those were long distance. Within six months of our breakup, he was diagnosed with prostate cancer, which he lost his battle with in early 2010.

Not to say I've been watching these episodes and bawling. But you know how it is when you're watching something in a dark room and the the lower part of your field of vision starts to blur. You're fine and nobody would ever notice, but your mind races with that constant battle between the bad memories and the good ones.

I can't stay mad about the past for very long. There was a lot of good there, too, and while it's never easy to let go, it's always more rewarding to be happy and thankful. And we as a culture need to learn to quit rolling around in our grudges because that shit stinks. 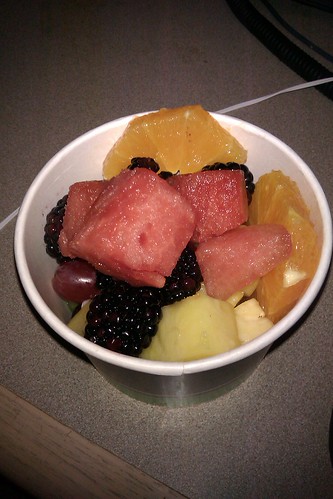 On the subject of allocating money, originally uploaded by christopher575.

I just finished The Nerdist Way by Chris Hardwick, which was another in the long line of places I've seen mention eating smaller meals throughout the day. That's a good thing, healthy snacks are a good thing, blah blah. We all know this, but it's hard to actually work that into a daily schedule, especially if you want a nice variety of fresh fruit. I once posted a picture of a really great fruit salad I made, but I didn't mention that it cost me 20 bucks to make the big bowl of it.

Things with a lot of ingredients are frustrating that way. If you get all the stuff to make it, it's in such quantities that you end up with six servings. Good luck eating it all while it's still good! So I finally decided to eat a slightly smaller breakfast when I get to work, and enjoy a very nice fruit salad with just a touch of yogurt (like 2 tablespoons) midmorning. I was just really tired of being so hungry by the time lunch rolled around.

It's hard to tell in the picture, but this is a nice big bowl of fruit, with a little yogurt in the middle. It's the largest bowl our cafeteria offers, which if it was filled with soup at lunch would be $4.05. Filled with fruit in the morning, it's $3.60, so four days a week of it costs $14.40. I'm totally fine with this. I think that amount at the store would get me the same or way less, but I'd also have to make it last four days. Getting whatever's fresh each day is pretty damn nice.

Another thing I decided to spend some more money on was a second membership at Citizen Radio. They've been trying for months now to get to 700 members so they'd have enough money coming in to pay contributors for some new shows, and were in the home stretch. I could have just upgraded to a $25/month membership instead of two $10 ones, but that wouldn't have increased the membership numbers. So, even though it'd be a little more money, it wouldn't help toward the goal they set. I spend $5 a week to support my favorite daily news podcast, and again, I'm totally fine with that. 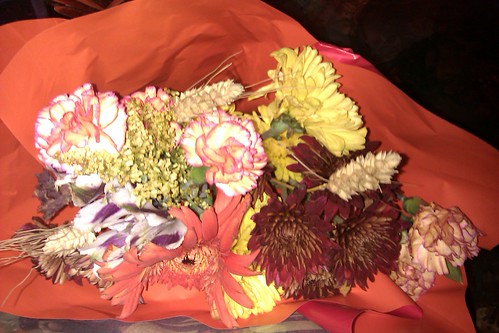 Garrett got me flowers! :D, originally uploaded by christopher575.
Collapse