You know what I hate? I hate when people who don't need them use a handicap door. At my first office building in Seattle, there were handicap doors on either side of a revolving door and most people would push the button and watch as the door opened slowly. Then the door would sit there for a while before finally closing. What's so hard about using a revolving door? What's super annoying is that buildings who have them specifically want people to use them so the cold air from outside doesn't blow in. And instead, the doors sit open for a great deal of the day because people are too precious to touch a door. But buttons are somehow ok.

Anyway. There's a handicap door in the office in one spot where there really shouldn't be a door at all. But you can open it by pulling on the handle, pushing the button is the ultimate act of laziness. I might understand if you were carrying an armload of bagels and coffee for your coworkers, but even then, you can actually walk around the other direction and come in that one room from the other side.

I hadn't thought about it in a while because I luckily hardly ever see any coworkers any more now that I have an office to hide out in all day. But I can see that one door when I head to the bathroom or kitchen, and twice this week I saw the same girl push the button, stand there, and wait for the door to slowly open for her before going through it. Seriously, it's hella slow, but you can just pull the handle and walk right through!

I wouldn't have thought to mention it, but as I was entering the building just now after getting my fruit, someone was walking out right as I swiped my badge to open the door. Naturally I stepped aside and opened the door for her, and as she walked past, I realized it was the girl who I saw twice this week using the handicap door. I have to wonder if she waited near the door for someone to come along and open it for her. 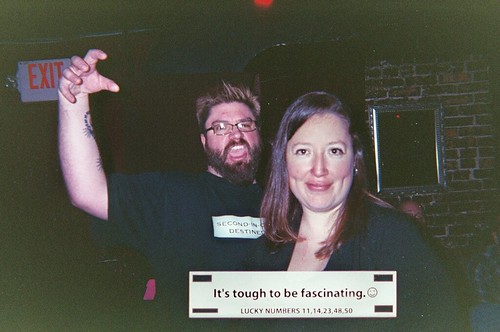 Ain't that the truth, originally uploaded by evil robot 6.

I keep wishing I had my hair blonde again for the winter and here's a picture from like a year ago just now popping up.

See, this is what happens when people let little things leak here and there instead of just telling the whole story to as many people as soon as possible. They've planned a little better for this cafeteria thing than I've been led to believe. Just earlier, for instance, I was wondering if there would no longer be access to ATMs on campus since the ATMs are in the cafeteria. As it turns out, they'll be in the lobby of my building! Right alongside the espresso service! I'm guessing my beloved fresh fruit won't be part of that, but I'll hold on to a glimmer of hope.

In addition, they'll have some sort of food service tent out by the food trucks. They didn't say what'll be there. My guess is that it'll be those pre-made sammiches and salads that I never get now that I'm on this campus. Back when I worked downtown, they were one of the better options, but not any more.

They also said the food trucks will accept credit cards and our corporate meal cards (I don't have one since there's an ATM around) and will actually be 10% cheaper than when they're parked elsewhere. That's at least something, since I've been looking at the menus and would end up spending in one example $11 for that day's food truck lunch when the thing I'd get in the cafeteria that day would be $6.50. Taking $1.10 takes off a little of the sting, but not enough to go there very often.

I think they probably should have tried to find some non-gourmet food trucks.

Anyway, none of this changes the fact that they're not going to have enough refrigerator space, not by a long shot. And the food truck lines will be insaaaane. 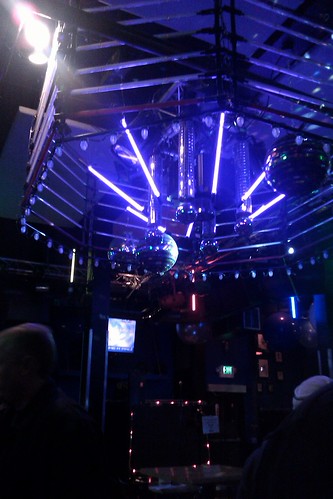 Seriously, what are the odds? I decided at the last minute to surprise everyone, but almost everyone skipped tonight. Then I tried to post, but posts from flickr weren't working. Sheesh.
Collapse