Yesterday's walk was from our place near 15th and John on Capitol Hill to Calamity Jane's in Georgetown. I followed 12th over to Beacon Hill, then 14th Avenue South all the way to Snoqualmie where it crosses down. It was a really excellent walk and I saw lots of cool houses and stuff on Beacon Hill. And a few trashy ones. It's 5.1 miles and Google thinks it should take an hour and 37 minutes. I think the world of Google Maps walking directions isn't really realistic when it comes to time. I walk pretty fast, and it took closer to two hours. Of course, there are all the stoplights, but still, I don't think my normal walking speed would be considered average.

It was raining a bit, and it felt great. Until I got to breakfast and I was soaked through to the shoulders of my t-shirt even though I was wearing another long-sleeved shirt, my hoodie, and an anorak. Might have to get some better rain gear, because the anorak really does nothing to keep rain out. Maybe they aren't supposed to, I don't know. It does feel a little warm to have a wet one on, but you're still wet.

Anyway, five miles was a really nice walk and I might have to do that distance every other weekend or so. But I'd definitely want to find a route that either ends back here, or ends where there's an easy, quick bus ride back. After breakfast I had my friend Julie drop me off at the Northwest Worklofts on S Horton for my haircut, but my hairdresser wasn't there. I gave up about 25 minutes later and started walking toward the SoDo light rail stop when he finally woke up and called me at 11:30am. I could have turned around and met him there, but he had a noon appointment, and can't really do two people at once, so I just decided to go home. He was supposed to come over and cut my hair here last night, but excuses and stories and whatever.

Back to my point, which was that even though I barely had to wait at the light rail stop and caught a bus downtown just as I arrived and just as it was leaving, it still took about a full hour to get home from the lofts. Mostly because of Comicon traffic, but that only accounts for so much. It could have easily taken longer, too.

Hopefully the haircut will happen tomorrow. My beard is making me crazy, but I don't want to touch it since he can do it with my hair and make it all look purty. 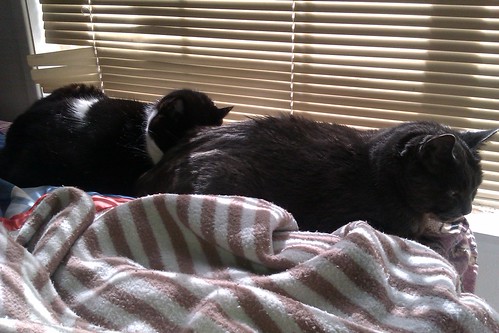 On the set of Human Centipede 3, a photo by christopher575 on Flickr. 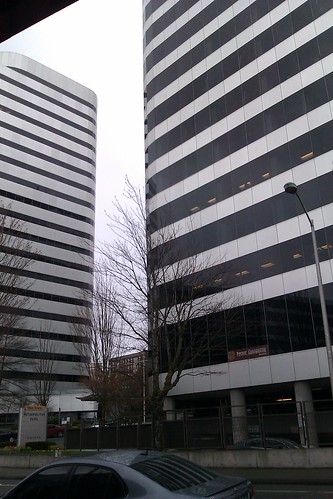 Waiting for Dina Martina, a photo by christopher575 on Flickr.

The rain's a little nasty so we are cowering by the emergency exit.