Finally managed to get the desk I've been wanting for, oh, eight months now?

It's actually kinda ridiculous, I started typing the I-K-E for Ikea's web site and it instantly filled in the URL to this very desk. Yup, been looking at that page for months. I would have just gone down there and gotten one, but there are some long pieces, so it wouldn't have fit in the car. Garrett's dad has a truck, but we would have had to go up to Everett, down to Renton, home, back up to Everett, and back down. And I realized years ago that my time is worth something to me, so I decided to hatch a plan. I sent out a message to a lot of people asking if anyone would ever be interested in making some money picking one up for me, found someone who was, and then kept an eye on craigslist. Eventually, I was able to paypal him $140 for a $90, which left $50 for him, minus whatever fees there were. It worked out nicely since he works in Interbay and it was near Discovery Park.

The desks are $119+tax new, so I paid close to the same, but I didn't have to go anywhere, and it's already put together. Score! There was another gal who had some even cheaper, but of course they got snatched up out from under me.

Now I have to clear some space for it. One nice thing is that a lot of what's in the way can go on the shelves. Another nice thing is that they make cool inserts for the shelves, like boxes with mirrored doors or sets of two drawers. I'm trying to decide if I should fill in all four up above to stop Steve from hanging around in them. It might be nice to set aside one for him. I dunno. I may also need to move my lamp that's next to the bed, but of course that would require an extension cord, since it's that setup where there are no installed lights in the ceiling, but the switch controls one of the outlets. It's good to have the main light source hooked to that.

Reservations are coming together for our trip to DC and Philly at the end of February. For those who don't know, Garrett has always traveled in the spring, and he goes domestic one year and international the next. This year was Iceland, and last year was our trip through New Mexico. I think it's a great pattern and I'm very happy to join him. I'm also very grateful that he loves planning travel and he's also very, very good at it. If being a travel agent was still a thing, he'd be totally successful.

Some spammers have been leaving silly comments about having a crush on me on random, old entries. I've actually really been enjoying it. It only takes a second to go delete the comment and block them, and I get to see a random, old entry. In fact, I think LJ should have a "view random entry" feature the way Wikipedia does. Random among your own and random among your friends. That'd be fun.

I need to spend about $545 of FSA money before the end of the year, so I think I'ma get an eye exam and some pricey glasses. Perhaps I should make a day of Ikea (to pick up some inserts for the desk) and then that.

Oh yeah, I got my hair cut on Thursday. I'd post a picture right now, but I'm not alone in the office and it's weird to set up Myspace angles when someone's in the background. I'll be glad when the blonde is all gone. With just a little bit on top, it really emphasizes how I struggle to style it.

I liked this band when I saw them at the disastrous party with Sharon Needles a while back. Interesting to see Raja in the video.

I bought their LP after the party. It's cute. 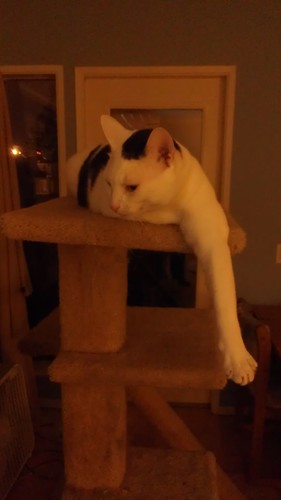