I was looking through what was needed for the various FOK breakfast recipes and realized there were two extremely ripe bananas in the kitchen, so I should go ahead and try these cranberry orange muffins. This was another investment upfront. Aside from the bananas, the only thing in the recipe I had onhand was the cinnamon and the vanilla extract. My vanilla extract probably has alcohol, and that's fine, and I didn't bother looking for gluten-free oats.

I made a rookie mistake. I should have waited and gone to WinCo first. They've got a great bulk section and I know for sure I overpaid for the dates and craisins. Plus, everything's cheaper there. But I only go there early in the morning and for some reason I just wanted to get the shopping done.

Not sure if my breakfast once these are ready will be one muffin or two, but that's either six breakfasts or 12. Thankfully bread products freeze well.

I'm glad this one's on the website. We have a tablet mounted on a kitchen cabinet by the stove, and it's so much easier to cook from there than from the app on my phone.

I'm always saying everyone needs to keep their phone on them or nearby. Not only because it's frustrating when you can't get a response to a text because the person keeps their phone halfway across the house, I'm mostly worried about seeing something cool and not getting a picture. I wanted to charge my phone yesterday while I went for a haircut, and thankfully I didn't see anything cool.

I was dumb to think I could take out the garbage and recycling this morning without my phone.

The weather's actually pretty nice right now. But I went to the pool, and it was teeming with kids. I've never seen it so crowded. They normally keep three lanes for lap swimming open during the open swim, but they took the innermost one out to make the pool bigger for the crowd. I only treaded water for 17 minutes because I got tired of getting splashed in the face so much. Guess I won't be going back unless it's to check out early laps or the late evening open swim. The latter is unlikely since I go to bed so early, though.

I wanted to get a little more activity in, so I went ahead and mowed the lawn. May as well track that, too. 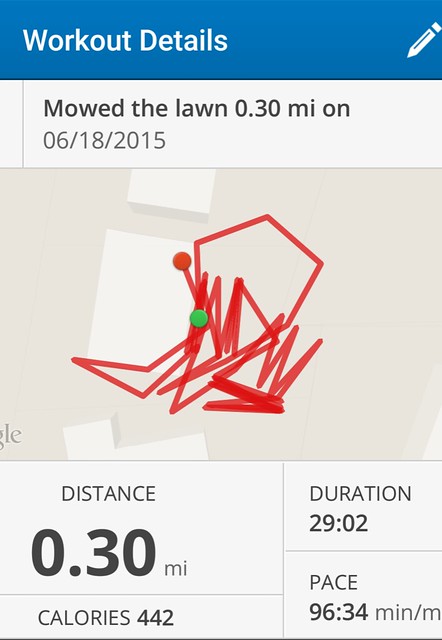 I'm going to make those muffins I mentioned earlier tomorrow, and it turns out I bought way more dates than I needed to. The recipe calls for a half a cup of date paste, but the link to the date paste recipe is for a ton more than that. I should have realized that. Guess I'll be trying lots of new things with date paste. I made this velvety macaroni recipe today so I'd have a side for my white bean burgers today and tomorrow. I added the garlic powder too late, and used frozen squash instead of cooking one up myself. I don't think those two things account for how much I didn't enjoy the recipe. I mean, I'd probably like it a lot if I added a ton of salt, but that defeats the purpose since I'm doing this for my blood pressure.

And the author of that recipe says that it feeds two. It's more like 8-10 servings. I ate a big helping, saved a big helping for tomorrow, and tossed the rest. It's a bummer, but the thought of eating any more after tomorrow turned my stomach. I'm getting ready to make a stroganoff recipe and maybe some thai noodles for lunches next week. I've got a lot of what I need, but some of it needs to be fresh the day of. Some of what I have, I'm worried will go bad, so I might go halfway through one recipe tomorrow, freeze, and finish on Monday.

This has been a crazy week. Shopping for a lot of ingredients, cooking a lot, walking a lot, and driving to the spot where I've been walking, it's a lot for someone who normally hangs around the house most of the time. But I've felt pretty on top of it all and am enjoying the feeling of accomplishment. Looking forward to a nice, relaxing weekend.
Collapse