He actually won $5,750. I've been watching Card Sharks on GSN, and the DVR catches the last minute or so of Press Your Luck. Halloween was a bust once again. We were so excited when the doorbell finally rang, but instead of trick-or-treaters, it was our neighbor we recently made friends with. We invited her in and had a grand old time chatting with her for over two hours. That worked out nicely because it kept us up late, which I think should help with the transition to Standard Time. I also stayed in bed late and skipped the walk.

Lobster ravioli with a pan sauce I made from half an onion chopped and cooked until browning in olive oil, to which I added three cloves of garlic, about half a teaspoon of capers, salt, pepper, and the juice of three quarters of a lemon. When it cooked down a bit, I added a little more olive oil, then deglazed the pan with a few glugs of pinot grigio. As that cooked down again, I added a little bit of dijon, and because I found it a bit tart from the lemon, some Worcestershire. When the ravioli were cooked, I fished them out of the water and tossed them around in the other pan with a sparkle of parmesan.

I was originally planning to toss the peas in the rest of the lemon juice with olive oil, salt, and pepper, but the pasta turned out more lemony than I planned, so I used balsamic in its place. 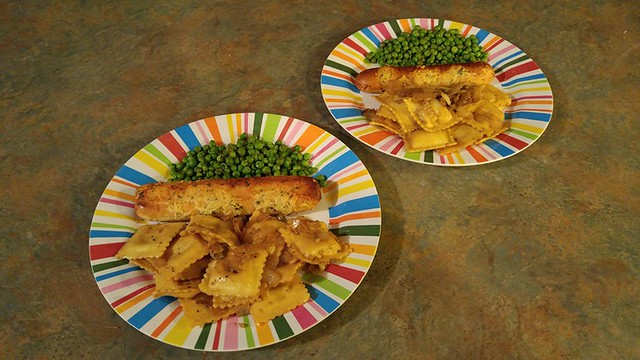