I've got a busy day tomorrow, but not a whole lot's going on today. Garrett and I teamed up to give Sam his liquid meds this morning. He hates it, but it's been a few times so his resolve is starting wear down and he's fighting it less. He'd managed to get his cone off, so when I brought him his lunch, I let him eat before putting it back on. That's so much easier than feeding him with a spoon, which is what I was planning to do. The tea cup worked ok, but it was still messy.

Did my hour at the pool. Pretty uneventful. The new lockers aren't installed yet, which is fine because the locks I ordered are arriving tonight. I thought about assembling a couple of the magnetic terrariums I'll be selling, but I noticed that it takes up to 72 hours for the glue I used to fully cure. Since I'm using colored sand in them, it's best to wait. In fact, I've only glued two so far and should probably do the remaining four on the off chance they all get ordered. It'd be just my luck that I'd have to delay shipping for glue.

I created a new tumblr today! It's for pictures and videos of cats that have been enhanced with apps like Snapchat and Perfect365, and it's called snapcatting. Mostly what's there so far is Steve since I don't have any submissions yet. Please submit if you have anything! And make something to submit if you don't. :)

Just went in to check on Sam. He's not as miserable as he looks. 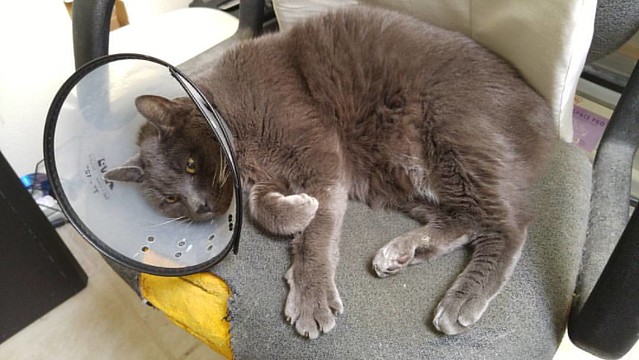