Kicking off a week of swimming and yoga on a Tuesday was funny, because Tuesday and Thursday were when I used to swim, but I switched to Monday and Wednesday once an obnoxious swim team started hogging up the whole deep end during open swim hours. Since I didn't want to go over there and possibly run into them, I did yoga this morning and went for the noon open swim.

It's weird being there with tons of people I've never seen and wonder if they're regulars or not. I see mostly the same people in the mornings whenever I go and enjoy seeing how consistent everyone is. And surely people think the same thing about me.

There was a nice post about Alien vs Predator on tumblr recently that made me want to see the movie again. It's not a masterpiece by any means, but there's some stuff to like about it. Netflix doesn't have it on DVD or streaming, and you have to pay to stream it on Amazon. I was able to find a DVD on eBay to buy for about the same price as a one-time Amazon rental, so I just went ahead and bought it. 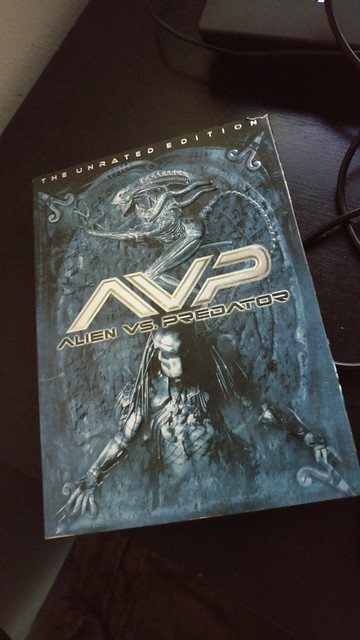 I went from having a huge VHS library growing up, to having a lot of DVDs, to buying almost no DVDs for years. I've put a lot of mileage on my Netflix account and don't mind waiting a few days for a DVD. But it's definitely disappointing when they don't have a title, and that's pretty much the only reason I'll buy a DVD any more.
Collapse