Today would have been a perfect day for a swim. The open swim session starts at 6am, and I had to get my teeth cleaned at 8am, and the dentist is just a bit further down the road from the swim center. But there are still a couple of scabby parts on my tattoo and I didn't want to irritate them, so the plan was to head to Lowell. It's an easy place to get in a good walk that doesn't take too long, and it's close. I tried to have the coffee brew automatically at 3:45 so it'd be ready when I came downstairs, but that was my first time trying to program the coffee maker, and it didn't work. But that's fine. It was a super dark, creepy walk. Someone was awake at an encampment near the end of the trail, so I turned back sooner than I planned, and I may have even seen someone in a sleeping bag near where I started. Oh well. I don't think anyone who's sleeping down there would make any trouble. It's just creepy. And pretty soon the sun will be up really early.

I only took one photo today, the normal view of the new houses. 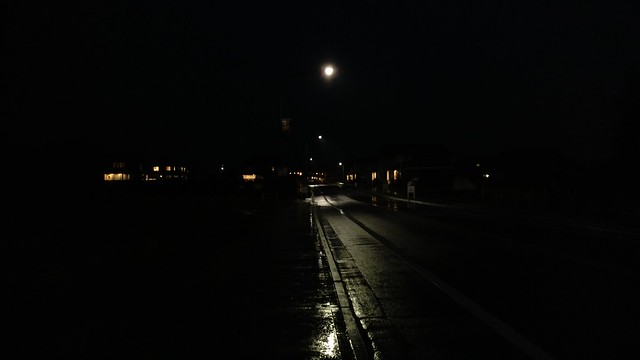 There was plenty of time when I got home, so I brushed my teeth, had breakfast, and brushed my teeth again before heading over to the dentist. That was a miserable visit. I gag easily, and dental x-rays are the worst. Thankfully there were only four to do, and only one of those had to be re-done. I need a deep cleaning for my back teeth, but the soonest they could get me in for that is ten weeks from now. Funny how that always happens.

The assistant was really busy so I had to wait a while to pay, which made me late to a conference call that was thankfully optional for me. But I made some good contributions in the time I was on it. There was another call this afternoon, but I had enough time between to go out to lunch and get some groceries. And get chores done. Quite the busy day.
Collapse