A while back, I decided I really wanted a tattoo of Freckle from The Gay and Wondrous Life of Caleb Gallo. My favorite Freckle quote comes from this scene:

The scene I wanted to base the art on:

And I had the perfect spot for it, my left calf. My left arm is done, I'm planning a full Tron sleeve on my right leg, and I hope to figure out another sleeve for my right arm. My back's totally spoken for even though I don't know what all's going there. But my left leg's already a grab bag of stuff, so that's perfect.

The only issue was that my artist Jimmy doesn't do color portraits. He does amazing black and white ones, and that will be perfect for the Tron sleeve.

He really wanted to draw Freckle, but I wanted color, so that just wasn't going to work. I'm glad he's really honest about that and just wants what's good for the project. He even said he didn't think anyone who works for him was right for the project, but he had someone in mind who would not only be perfect, but would be coming up for a guest weekend in the shop soon! He showed me Stephanie Nuzzolilo's Instagram and I agreed, she was right for the job.

I sent her the still photo of the gif above and the video, and she asked me to send screenshots of tattoos from her Instagram I liked most so she knew what direction to go in. I sent these because they're realistic but also have lots of graphic elements. Just lovely. 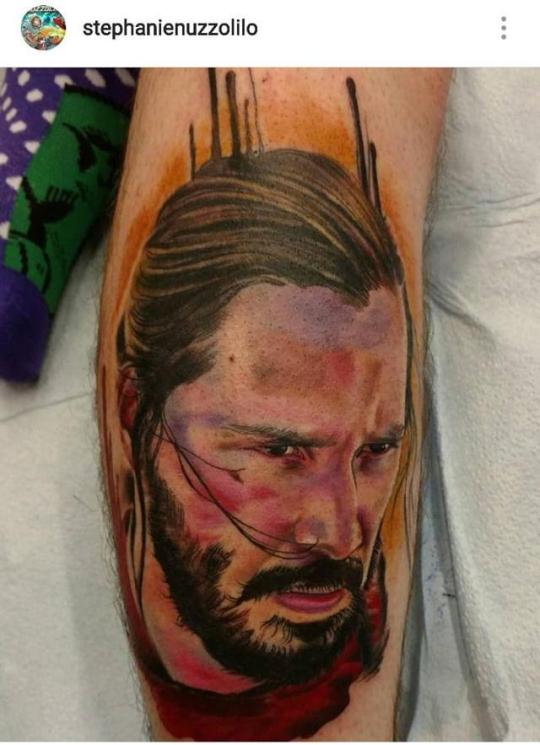 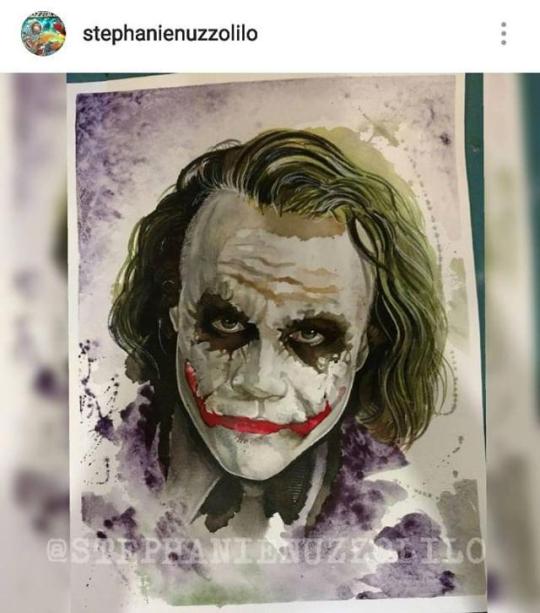 That was November 10th. I sent her a deposit via PayPal and all that was left to do was wait until yesterday, December 29th. I was in the shop on the 28th, though, for another appointment with Jimmy for my back. We had a plan in place for a while but he was having a difficult time executing it and we realized even if we drew it perfectly, it probably wouldn't be as big as we'd like. This Patrick Nagel painting was the basis for that piece. It's been the lock screen on my laptop for years. 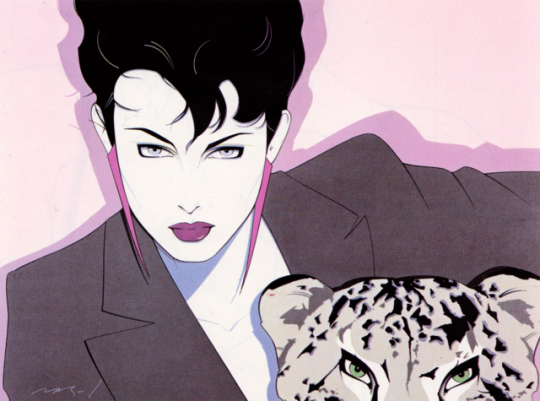 The plan was to have her holding a finger to her mouth in a "shhhh" fashion, with her other hand on a plasma ball. Think 1980s fortune teller. But it just wasn't meant to be. Since we've always had a "go bigger" philosophy in our work together, we decided to choose two Patrick Nagel women to be on either side of my back, and because I'd have a long appointment the next day, we just did the outlines. 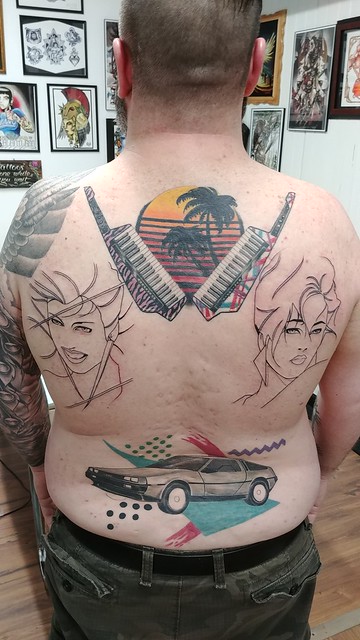 That solved another potential issue of my scars being too visible, now we can do something more ink-heavy in that center spot where that's an issue.

You probably recognize the woman on the left, she's on the cover of the Rio album by Duran Duran, easily the most famous example of Nagel's work and likely the reason that style became so popular. You still see it in just about every salon window to this day. The one on the right is a flipped version of this one. 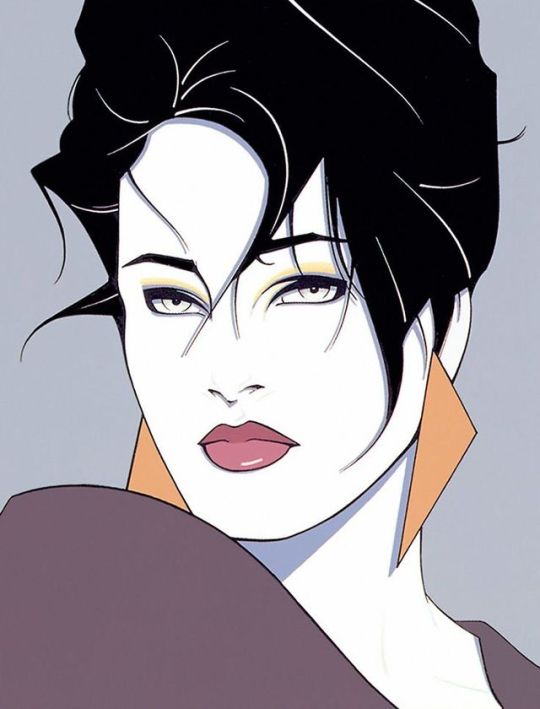 If you were friends with me on here when we moved into the apartment in 2014, you might recognize her from some temporary decor I put up, which definitely looks like foreshadowing now. 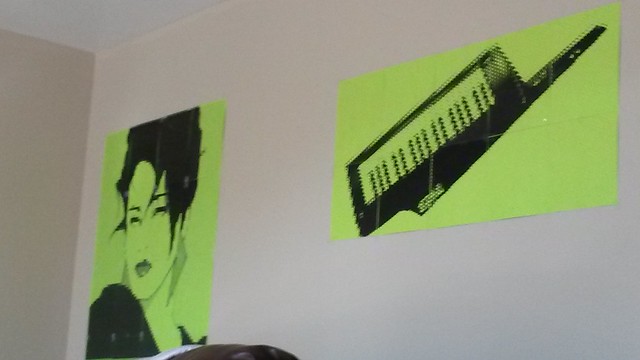 I got to the shop yesterday and unfortunately had to come right back home. Stephanie was running behind due to traffic on her way up to the shop. She'd messaged me on Instagram but unfortunately I didn't have push notifications set up on my phone. Now I do. My appointment was at 3:00 and she had me come back at 4:30. We did a final design review, she got to work on her stencil, and I was on the table from about 5:30-10:00. A very late night for me, and a lot of pain. Thank goodness she had some lidocaine she used for the last half hour or so, I was miserable. It was worth it, though. Pardon the huge scratch on my leg. 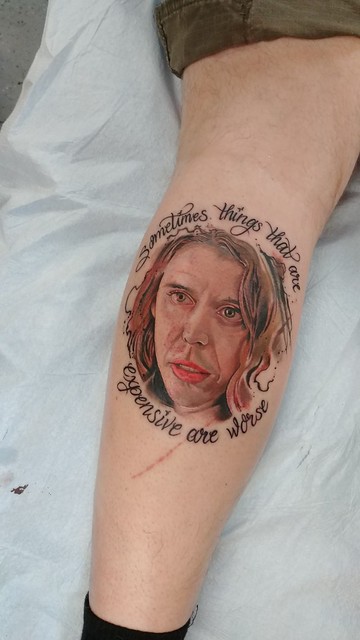 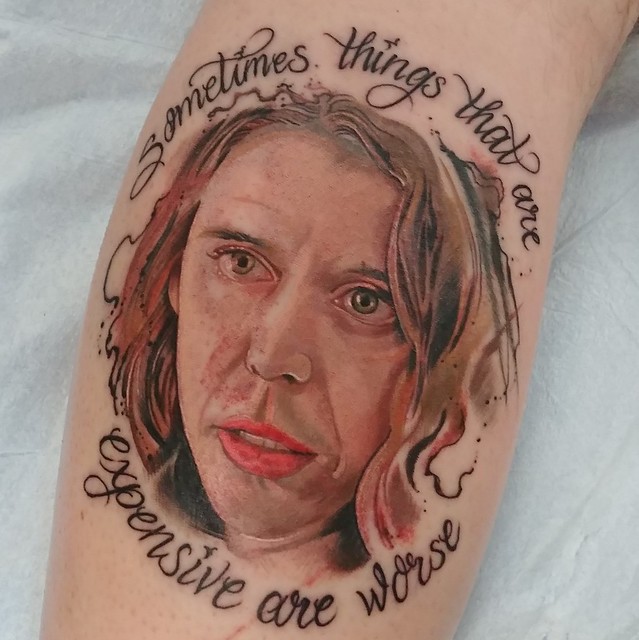 I tagged Jason Greene who plays Freckle in the photo on Instagram. He reposted it and it got 4,000 likes overnight. I wish he would have tagged Stephanie, but it's highly likely he hasn't figured out how. I made sure to tag her in the comments.

It's been a long and expensive couple of days but I'm very happy with what we've accomplished.
Collapse