After the last of the previous batch of scheduled appointments, we put three more in the calendar. One last Friday, one this Friday, and one on August 3rd for the final touch-ups. Then we need to leave my back alone so it's healed completely and settled for the contest, which is on September 29th, the third and final day of the convention. I went ahead and booked Friday and Saturday night and will be in the full back contest (9/29 at 2pm) and the color portrait contest (9/27 at 8pm).

Thankfully they've changed the contest rules a bit. Now a tattoo can only be in one contest the entire weekend, and it costs $5 to enter a contest. The reason I'm relieved is that there were too many people in one of the contests I was in two years ago and it took forever. Glad to see that people have to be selective now and also show a little commitment by paying a small fee.

We got a lot done on Friday after finding some inspiration while image searching '80s Trapper Keepers. 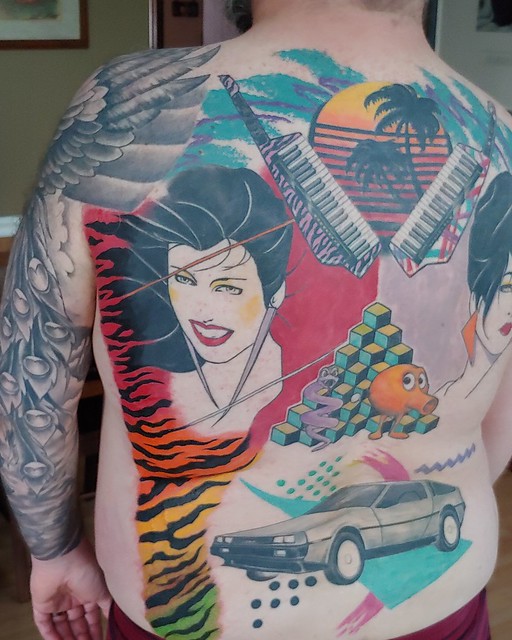 I was really struggling, so he used a little vasocaine, which is a topical anesthetic specifically for tattooing. You can't use it ahead of time, though; it only works on broken skin. So he got the outline of the zebra stripes done, applied it and let it sit for ten minutes, and then got back to work. What a relief. I really love the way he made Rio's hair transition into the zebra stripes and his rainbow technique is masterful.

This week we'll do the other side with a similar treatment in leopard. Not sure if he has anything in mind to fill in around the DeLorean or if we'll have time to do it if he does. I'll have to wait and see.

I also have an appointment on August 2nd with Britney, one of the shop's apprentices. She hasn't tattooed me yet, so I decided to tap her for a tattoo of Lursa and B'etor from Star Trek. 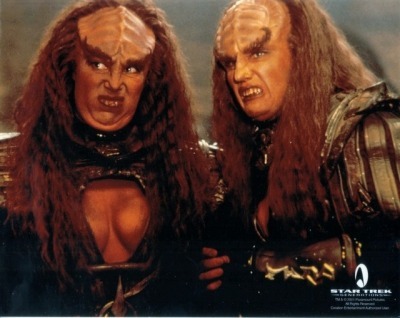 I think her style will make for a really funny tattoo of them. The hard part has been providing good reference material. I searched a lot and was only able to find a little bit of fan art and not nearly as many screen caps as I figured there would be, probably because Klingon ships are always dimly lit. Looking forward to seeing what she comes up with.
Collapse