New default LJ icon origin, a lovely photo by Chris Robles. I can't tell if he deleted his LJ account or if I'm just not spotting it in the list. I see him every day on IG, twitter, and Facebook, though. 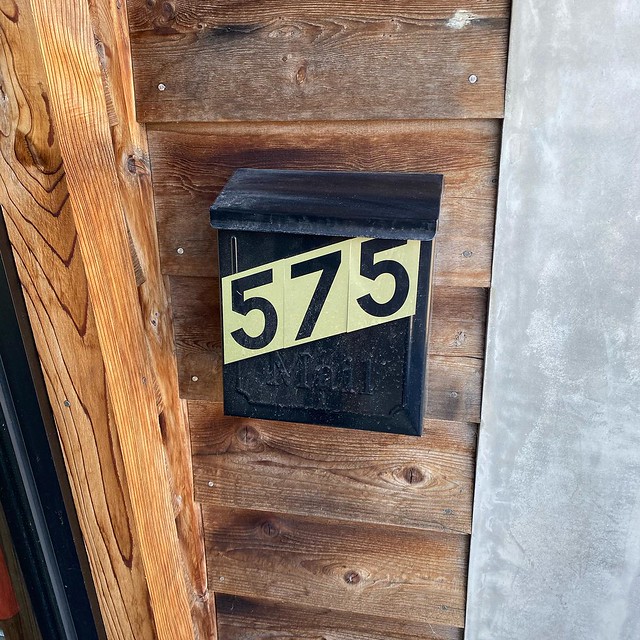 I love the photos people take of 575s they spot. It's not a common address because blocks aren't usually long enough!

This was definitely a strange Thanksgiving. Even though we were only seeing my in-laws, who are the only people we ever see indoors, we decided to lockdown as closely as possible to what our governor asked for, which was two weeks even though it was announced Monday the 16th, which was less than two weeks before Thanksgiving. I'd been to the grocery store on the 14th and had a distanced-and-masked outdoor walk with Lisa on the 15th but otherwise, no contact. We did grocery deliveries rather than have our usual Saturday shopping trip on the 21st, and my in-laws always order online for curbside pickup. So, pretty good isolation! I decided not to take any photos this year since (hopefully!) lots of people scaled back their plans. I don't think the amount of air travel done this week reflects that, though.

So yeah, watch for huge surges in a couple of weeks.

It was also an interesting Thanksgiving because we were working within Garrett's newly-discovered food allergies. There are lots, but the most impactful are soy, sesame, and tree nuts. Among those, which would you think is hardest to avoid? Surprisingly, it's soy. It's in just about every processed food. Would you think it'd be in lunch meat? It sure is. So there's a lot more organic going into the cart and a lot more planning since it's hard to read labels of everything on a shopping list in real time. It's such a relief to not having him randomly getting sick as often, though!

My podcast and zine are still going strong. I even signed up for Zoom Pro because Google Meet keeps freezing up on me and Nan while we record. Hopefully we'll have better results with it.

A big pandemic undertaking that took a while to get through was watching Smallville, which I just finished a few days ago. It's a great show, but there are ten full seasons! A lot to get through even if you like it. I wish I would have planned ahead of time to watch it in two five-season chunks but since I didn't, I plowed through, fearing if I gave up the momentum I'd have a very hard time returning to it. Now that it's done, I'm finally able to work on The Magicians season 4 plus Ash vs Evil Dead.

I'm happy to report that my adjustable bed frame helps a lot, though I've recently realized that my mattress makes me sore after a while no matter what, even with the pad. I don't regret the purchase, though, because I don't think it'd be wise to buy a mattress that's very soft because it probably wouldn't last very long. So one of my next purchases will be a thick, squishy pad to put on top of it. Thankfully the crappy futon from my office works well for that in the meantime, although it's one size smaller than the mattress.

Work's going well, and just about every time I have doubts about that, I end up getting great praise for the way things are going or find myself doing an exceptionally good job with something difficult.

Not a lot to report but these days, no news is good news.
Collapse