I didn't really want to go to a wedding or a funeral during the pandemic, but I did both. Finally on Friday I had a family obligation that was a little more fun: the fair. Garrett was sick so it was just me and my mother-in-law, and we made our day easier and more fun by deciding to eat at the casino instead of the fair, and played some slots, too. I lost $40, she won almost $60. That means the purse she got at the fair was nearly paid for. And we accomplished our most important mission. 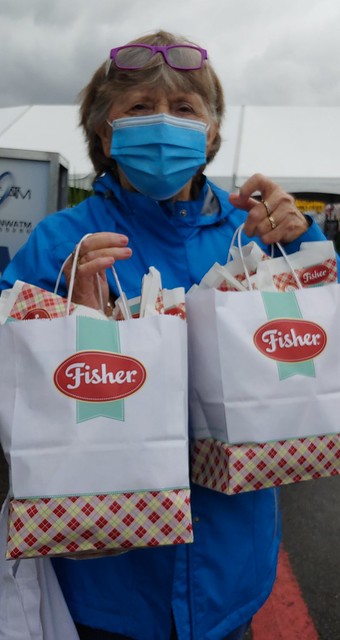 Scones! I'd sure love to know why one of us was ripped off, though. You can see one bag's smaller and that's because it's a bag of 10 instead of a baker's dozen. But we both asked for baker's dozens and paid for them. They're 13 for the price of 10 so it's like one bag is just...not the deal. And I unknowingly grabbed the smaller one.

She had me take this picture to send to Garrett to let him know we got them and I think it's just got such a quality to it. I took it with Snapchat because I had a full hand and Snapchat's easy to work with one hand. (Why isn't the volume button for the camera universally available? Beats me.) This was just after a major downpour and it was such a relief to get home a few hours later and take a warm shower.

Friday was such a weird day but at least it was a little bit fun. I'm happy to report that mask compliance at the casino was 100% because obviously people are worried about being banned from the facility much more than they're afraid of any consequences out in the real world.
Collapse