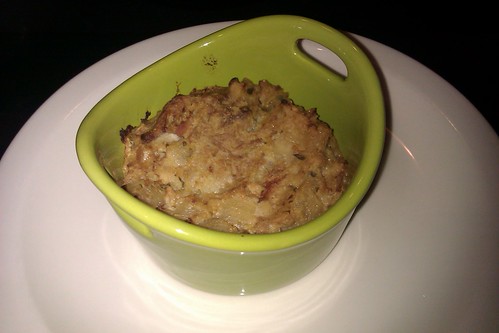 On Friday I put two packages of seared boneless pork chops, a chopped onion, a box of cornbread stuffing mix, a can of cream of mushroom soup. and 2/3 cup water in the crock pot. Nine hours later, it was like Thanksgiving in a bowl. Really, the only thing wrong with it was that it was missing that nice brown crunchy top that you get when you bake stuffing. Is it even stuffing when you do that? Is it dressing? Anyway. The idea of eating the leftovers just wasn't that appealing because of that.

I decided to try reheating a small serving in a ramekin to see if I could get it to brown. After eight minutes in the toaster oven, it didn't look like it was going to, and I wished I could set it on broil. Then I realized my toaster oven has a broil setting, so I did that for five more minutes. Fantastic.