In case you were wondering (but I doubt it) 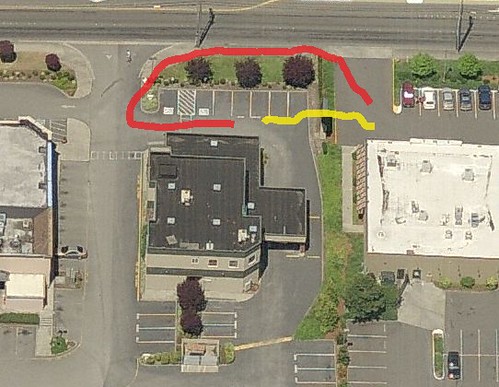 "You go around" was born at the bank next to the Applebee's in Lynnwood. Kyle and I had dinner there, probably before a party at Nicole's place because that's really the only reason I've ever been up north at night. The lot was full, though, so we parked at the bank next door.

The yellow line represents Kyle. He decided to climb over the rock wall that divides the two properties. It's hard to tell in the photo, but the bank is a little bit downhill from Applebee's. I decided I wouldn't be doing any climbing, and the red line represents my path. As I walked, Kyle pointed and kept saying "You go AROUND" as he laughed at me.

I was hoping for a view from street view that would clearly show the wall, but there are stupid cars in the way.