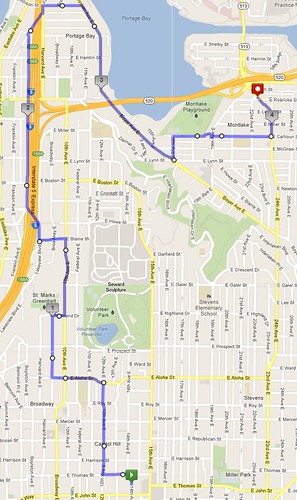 I found the Capitol Hill Steps I've heard about, and was impressed to
see that a guy was walking in circles up and down them. He passed me
coming up twice as I went down the Southern set once. I'm glad I found
them, because they open up a new option for getting back from points
North, one that's a bunch of stairs instead of blocks and blocks
uphill. The mistake I made yesterday was waiting until later to go. I
just don't enjoy it when it's warm out. Today's a day off, but
tomorrow I'll go as soon as I wake up. This makes 28.49 miles for the
week.